Antarctica Part 2 - Getting to Mount Erebus

After arriving in Antarctica, many days were spent preparing for the 2 weeks we would spend out in the field on Mount Erebus. Basically, science gear all had to be listed, boxed, and weighed before departure. Additionally, gear had to be separated into two shipments: 1) for the gear going with us to Fang Camp, 2) the gear we would need once we got to Lower Erebus Hut.

I spent quite a bit of my downtime drinking tea and writing in my journal while looking out at the sea ice and pressure ridges from the lounge area. I also got out for a couple of walks along the pressure ridges, which was very scenic and refreshing. 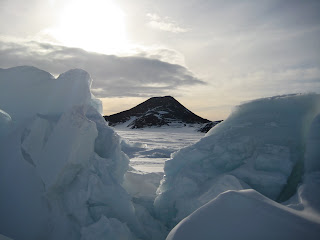 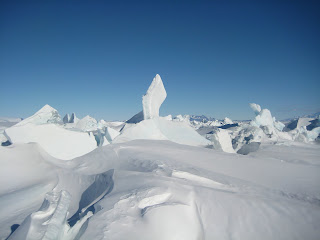 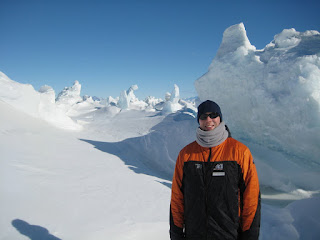 What made the walks even more interesting were the Weddell seals that had chewed their way through the ice and were lounging on the sea ice near the marked trail. 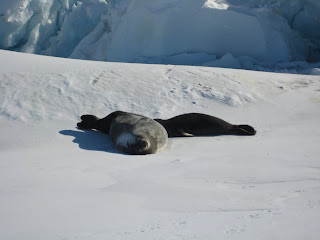 After spending nearly a week at Scott Base preparing, we got confirmation that we would be heading to the field the next morning. After a few last minute changes, it was determined that we would it take 2 helicopter trips to get the 6 of us and our gear up the mountain to Fang camp. Fang camp is about two thirds of the way up the mountain and is used as a stop for a couple of days to get used to the altitude. Flying directly to Lower Erebus Hut isn't done much anymore since the altitude is 12000 ft, which feels more like 16000 ft since it is so far from the equator, and altitude sickness is a real concern. In fact, most of us took Diomox to help adapt to the altitude sickness along with drinking at least 4 liters of water per day.

It was my first helicopter ride and it was simply amazing. 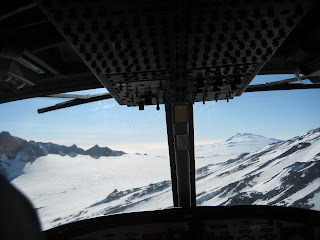 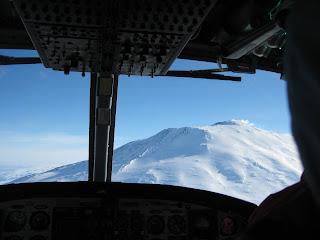 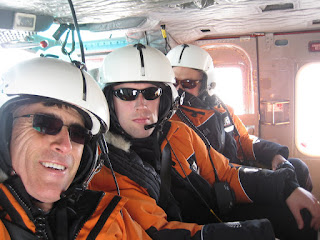 Once we landed, everyone helped unload and start to get gear put into our tents. A few helicopter trips later and we were on our own on the side of Mount Erebus. 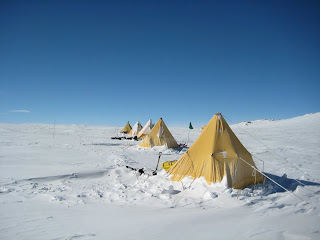 Antarctica Part 1 - Getting to the ice.

After about 20 hours of traveling I arrived in ChristChurch, New Zealand. It was early morning, and I didn't really now where I was going so I walked from the airport to Antarctica New Zealand. I tried on all of my clothing that they provided including enough to have 6 layers on top, 4 layers on bottom, 2 pairs of boots, and lots of other accessories. I met with the rest of the research team who are based out of University of Waikato:
Craig Cary, PI
Ian McDonald, PI
Craig Herbold, Post-doc
Chelsea Vickers, Master's student

That night we all attended the 2010 New Zealand Research Honours Dinner. This was the beginning of a crash course in NZ culture. Considering that I would be spending most of my time with these people in close courters with out running water, it seemed fitting to start the trip with everyone all dressed up. 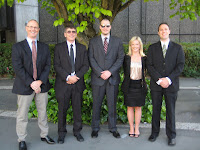 After spending a day getting little things done in Christchurch, our flight for Antartica left the next morning. For our flight we had to be wearing (or at least carrying) all of our ECW (Extreme Cold Weather) gear. We were given a short intro video on Antartica, then we went through security, and boarded a bus. A short bus ride took us out onto the tarmac and we picked up a bagged lunch as we boarded our plane. 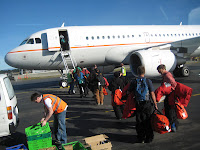 Seating was first come first serve so I grabbed one of the business class seats and settled in for the 5 hour flight. Almost everyone on board are scientists so there was lots of interesting projects being discussed on the flight. For example, the person beside me worked for NASA and was studying the soil and microbes in the McMurdo Dry Valleys, because these regions are thought to be very similar to Mars.

Interestingly, the cock pit was open and you could go up at anytime to chat with the pilots and to check out their view. The visibility was perfect and the views were fantastic as we started to approach Antarctica. 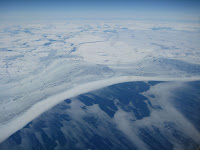 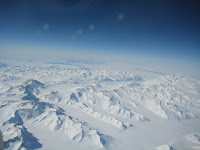 As we got closer to Ross Island, Mount Erebus was clearly visible and it was unimaginable that I would be living on top of it for 2 weeks. 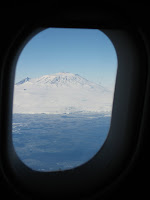 After landing on the ice runway, it was a short drive through the American McMurdo Station (max. ~1100 people) and into the smaller, cozier, New Zealand Scott Base (max. 86 people). At last I had arrived!
16 comments:

On Nov. 8th I will depart from sunny California and with a quick one day stop in Christchurch, New Zealand I will be in Antarctica. Now this isn't just a trip to Antarctica, this is the trip to Antarctica. Please allow me to gloat a little bit. After arriving at Scott Base on Ross Island I will begin a 5 day field training course to make sure I survive the expedition I will be taking on. After training, 8 of us will be flown halfway up Mount Erebus where we will acclimatise to the altitude by living in unheated tents for a couple of days. Then we will travel to the top of Mount Erebus to reach the "Lower Erebus Hut" at an altitude of 12,000 ft. We will stay there for 2 weeks doing daily trips to "fields"/fumeroles where the snow has melted away due to hot volcanic gases (did I forget to mention that the Mount Erebus is a active volcano?). The main goal is to collect soil samples and environmental data to examine the microbes living in this extreme environment. At the research station there is a small heated hut for meal times and work, but sleep will still be in the same cold tents with 24 hour sunshine. Dehydrated food and -20 to -40 C temperatures will ensure I lose some weight, but that is an added bonus.

To say that I am excited is an under-statement. Sure it will be hard to be away from my family for a month and the altitude sickness will make me feel like crap, but the chance to go on such a crazy expedition ruled out any chance of me turning it down.
How many scientists, especially those that do bioinformatics, gets a chance to do field work like this!?
4 comments:

Quote of The Day